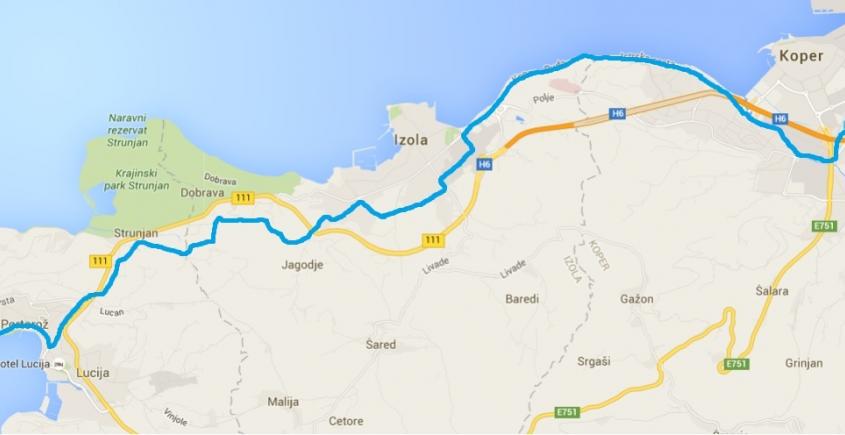 The entire route of Parenzana in Slovenia is asphalted and it is included in the network of bicycle trails under the name D8. From the station in Lucija to Piran you could travel with the electric tram, and today this time we can go cycling paths K8 and K12.

On the route from Koper to Portorož train passed for 45 minutes, with short breaks at stations in Semedela, Izola and Strunjan. The most attractive a move between Semedela and Izola, where the route passed through an embankment near the sea. The station in Semedela was originally just a simple eave, but later they built small building with a waiting room, because for the travellers coming from Buje these station was much more practical and attractive than the onein Koper for arrival and departure from the city.
One of the darkest events in the history of Parenzana took place in March 1921 in Strunjan, when a group of Italian fascists out of sheer wantonness fired on children who were playing near the station. Two children were killed, and five children were wounded. The tragic event is celebrated in the song Za Šentjanom je utonilo sonce, and the names of the dead children are engraved on the monument to the victims of fascism in Strunjan.

From the station in Lucija to Piran there was an electric tram with red wagons, which largely outlived Parenzana - the line was terminated in 1953.

Koper, Izola, Piran - in city centres you can find many restaurants, taverns, wineries and tasting local products, full of flavour and scent of this part of Istria
Refreshment stands outside the urban centres: