Operation of the railway

Home / History of Parenzana / Operation of the Railway

Operation of the railway 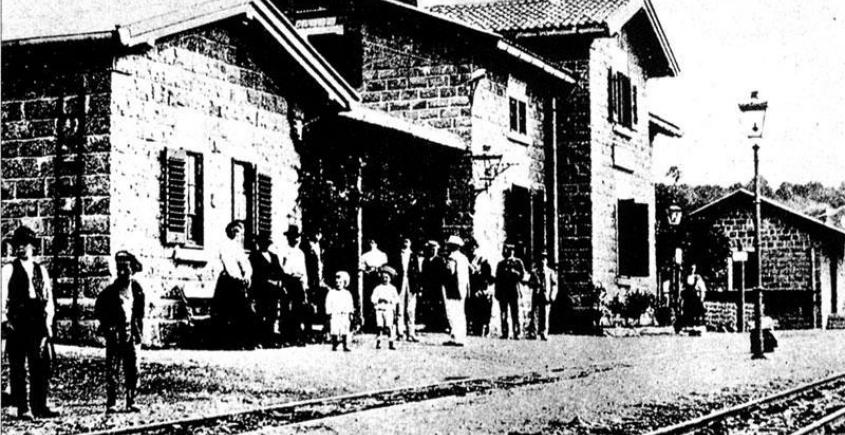 The Austrian State Railways, managing the Parenzana line, decided on the U-series locomotives, a popular and proven type of tender locomotives with three connected axles and a rear carrying axle.

Four brand new locomotives of the U-series (U 20, 21, 22 and 23), built at the famous Krauss factory at Linz, arrived to Trieste at the beginning of 1902. The locomotives had saturated-steam engines, with simple expansion; they were of a typical Austrian design, with a high rectangular water tank and spark arrester. After the First World War, the Italian railway administration replaced these first four locomotives, which were running alone on the Parenzana railway until 1908 when, due to an increased number of trains and the need for spare locomotives, four additional U-series locomotives were purchased (U 37, 38, 39 and 40), assembled at the Sigl factory at Wiener Neustadt.

Towards the end of 1903, a steam railcar was bought for the Parenzana Railway. It had sixteen seats of the first and second classes. The steam railcar operated until 1904 on the Buje-Trieste section when it was sent to another line in Austria on the grounds that it was unsuitable for long uphill and downhill slopes on the Parenzana line.

Due to the increased traffic in the subsequent two years, in particular on the Buje-Trieste section, larger and heavier train compositions were needed, which the U-series locomotives could not haul even with the help of a pushing locomotive. For that reason, a special tender locomotive was designed exclusively for the purposes of the Parenzana Railway, named the P-series locomotive after Poreč. It had four connected axles and a tender; the engine operated on saturated steam with simple expansion and had 300 horsepower; the locomotive weighted 36.1 tons. In comparison with the U-series locomotive, the P-series one had smaller protruding water tanks, a coal storage in the rear part of the cabin, a slender and more modern shape because it was shorter and its proportions were better, a shortert chimney and a smaller and different spark arrester. In 1918, under the Italian administration, also the locomotives of this type were removed.

In 1911, the Parenzana Railway obtained three new locomotives, designated as P1, P2 and P3, to replace the U-series locomotives (37, 38 and 40), which were sent to other Austrian railways. The new engines were also built at the Krauss Factory at Linz. In the maelstrom of the First World War, the U21 and U22 locomotives were lost, while the remaining six U-series locomotives (4, 7, 8, 31, 33 and 42) were used to haul military trains, supplying artillery batteries and garrisons on the northern coast of the Istrian Peninsula. During that period, the Parenzana rolling-stock consisted of twelve locomotives, nine of the U-series and three of the P-series.

Some years later, the increasing traffic, which was expected to become even heavier, motivated the Italian State Railways to take advantage of the material from the Krauss factory at Linz on account of the war debt. Therefore, they ordered six new P-series locomotives at the Officine Meccanice Italiane (later Reggiane). The new engines (P4, P5, P5, P7, P8 and P9) started to operate at the end of 1922 and at the beginning of 1923

According to the inventory taken at the end of 1910, the Parenzana rolling stock consisted of six luggage wagons, two mail wagons, 28 passenger wagons (10 of the second and third classes and 18 of the third class only), 38 closed and 58 open wagons of different types, five 8-10 cubic metre tank wagons and a wagon for assistance and equipment.

All wagons were built at the wagon factory in Graz and had, therefore, set designations and dimensions: the external length of luggage and mail wagons was 8.12 meters, passenger wagons were 8 metres long and the length of freight wagons was from 6.78 to 7.56 meters. The maximum width of wagons was 2.40 metres. Some wagons with low sides and load bottoms were equipped with a rounded threshold, barriers and chains for the transport of long objects. All wagons had a central buffer, at the end of which there were strong couplings with a screw coupler.

The Trieste-Poreč railway had a single track composed of XXX type steel rails of the Austrian State Railways. The rails weighed 17.9 kilograms per metre; they were 90 millimetres high, with a base of 75 millimetres, the rail foot was 10 millimetres thick and the rail head was 42 millimetres wide. The rails were fastened to timber sleepers by steel ties and three hook nails. The sleepers were 1.6 metres long, with a cross-section of 14x20 centimetres, laid on 2 metres wide and 25 centimetres thick gravel bed. The subgrade was laid on a 3 metres wide plane with drainage ditches or scarp and, if needed, it was reinforced by a stone layer.

Nine metres long rails were supported on 13 sleepers. On the four-track section, which the Parenzana railway shared with the standard-gauge line to Sveta Sobota (San Sabba) and on some sections within the old and the new Sant’Andrea Railway Station in Trieste, the XI-type rails of the Austrian State Railways were used, which weighed 31.72 kilograms per metre.

The XXX-type rails were suitable for trains hauled by locomotives with a maximum axle load of 7.5 tons and running at a maximum speed of 25 kilometres per hour, with additional speed reduction in curves. The maximum permitted speed on straight sections was 30 kilometres per hour.

On curves with the radius of up to 100 metres, the sleepers were made of oak wood, while on those with the radius of over 100 metres, the sleepers were usually made of larch and only exceptionally of pine. In order to ensure the solidity, two additional rails of 32 centimetres in width were laid within the running rails along the entire length of bridges, as well as on both sides for the length of one rail (9 metres). At the ends, these additional rails were fixed by screws and nuts to a large oak block. Switches were also of the XXX type, except at the initial station in Trieste.

Structures along the Line

Facilities on the railway stations were built in accordance with the standards of the Austrian State Railways, applicable in all countries of the Austro-Hungarian Empire. In Austria and other independent states which emerged from the dissolution of the monarchy, constructions can still be seen today, similar to those along the Parenzana Railway, although there are some differences in the building materials used. For example, wood was the prevailing building material in the in the Alpine regions, while brick was used in lowland areas.

The Parenzana Railway had 604 curves; the shortest curve, located on the 3.237 kilometre at the end of the standard-gauge section, had a radius of 60 metres and it was 10.5 metres long. On the 78th kilometre, close to the Oprtalj viaduct, there was 234.6 metres long curve with the radius of 70 metres. On average, all other curves had a radius of 80 and more metres, most often about 150 metres on the section from Trieste to Buje and exactly 80 metres on the Buje-Poreč section.

There were nine tunnels dug out along the route with the overall length of 1,530 metres. The most magnificent one was the 544 metres long tunnel through the Lucan hill, located between the stations of Strunjan and Portorož, leading directly to the Sečovlje plain, thus avoiding a long drive around a high peninsula, stretching far into the sea, all the way to the town of Piran. Other tunnels, listed by size, were the tunnels at Motovun, Šalet, Kalcini, Freski, Kostanjica, Sv. Vid and two small tunnels at Završje. All tunnels were walled and their portals were constructed of cut stone.

There are few watercourses in the north-western part of Istria, so not many bridges had to be built. Only 16 bridges of modest dimensions were constructed. Their average length was little above 5 metres and the overall length was 192 metres. There are also six viaducts, all of them on the section between Buje and Poreč. Four viaducts stood between Završje and Oprtalj and the other two were located between the stations of Karojba and Vižinada. All viaducts were built of stone, with semicircular arches on strong columns. The viaducts were constructed on curves, with arches reaching more than 15 metres high.

In addition to bridges and viaducts, there were many embankments constructed, with central islands and arched crossings. There were 538 unprotected level crossings on the railway line from Trieste to Poreč.

There were sixteen stations and stops (excluding the Sant’Andrea Railway Station in Trieste) along the Parenzana route, comprising six waiting rooms for passengers (two first class and four second class), a double track station, four stations with a shed at the platform, a simple station, four self-standing sheds at platforms, five warehouses, six loading platforms next to warehouses, a storeroom for maintenance equipment, a depot for locomotives with a workshop, a water station for supplying the locomotives, two tanks with the total volume of 12 cubic metres, two coal storerooms, a weighbridge, eleven drinking water tanks, two lamp posts with a name board of the station on both sides, the facilities at the Sant’Andrea Railway Station in Trieste.

The buildings on stations and some stops were made of marl or limestone blocks, laid in even horizontal lines. Only the buildings in Motovun were made of limestone of unknown origin. The constructions on railway stations were a felicitous combination of functionality and aesthetics. Passenger and reception facilities were the central structures, built in proportion to the station’s importance and the volume of traffic as the first and second-class stations and sheds of shelters at train stops. The lowest-class stations were only equipped with a lamp post and the name board.

Due to the nice layout of a group of houses, embellished by climbing plants and surrounded by small gardens, the stations were giving an impression of small villas. The station premises included the station master’s flat and possibly also the living quarters for other railway officials, a ticket office, a lobby, one or two waiting rooms and a shed under which passengers were waiting for trains, protected against the sun and bad weather. In waiting rooms, under the sheds and in the open, closer to the track, there were comfortable benches; in an adjacent building there were toilets for passengers and railway personnel, a laundry, a storeroom and rooms for domestic animals. Next to the station house there was a refuse pit, emptied by the neighbouring peasants.

All stations, with the exception of those with a shelter for passenger and a lamp post, had the facilities for storing the train equipment, tools and the material for track maintenance. The most important facility was a warehouse with the access ramp and with or without the loading and unloading ramp. Weighbridges existed at the stations in Trieste, Buje and Poreč. At the Sečovlje station there was a road weighbridge, positioned at the left edge of the road leading to the station. It was used to weigh coal from the nearby coalmine. The stations at Koper, Sečovlje, Buje, Livade and Poreč had special coal storerooms for the operation of trains and heating of station buildings and other facilities.

Because of the many climbs, the steam locomotives needed a lot of water to run. For that reason there were eight water stations located along the track to supply the locomotives: five main water stations and three auxiliary ones. At the main water supply stations, next to the water tower, there was a long pit between the rails, the so-called stoker’s pit, with stairs on both sides for the stokers to get into the pit, from where he checked the lower part of the machine, cleaned it and, if necessary, oiled it while the locomotive was being filled with water. Such pits also existed at depots at the stations in Trieste and Buje and at railway workshops in Trieste, Koper, Buje, Livade and Poreč.